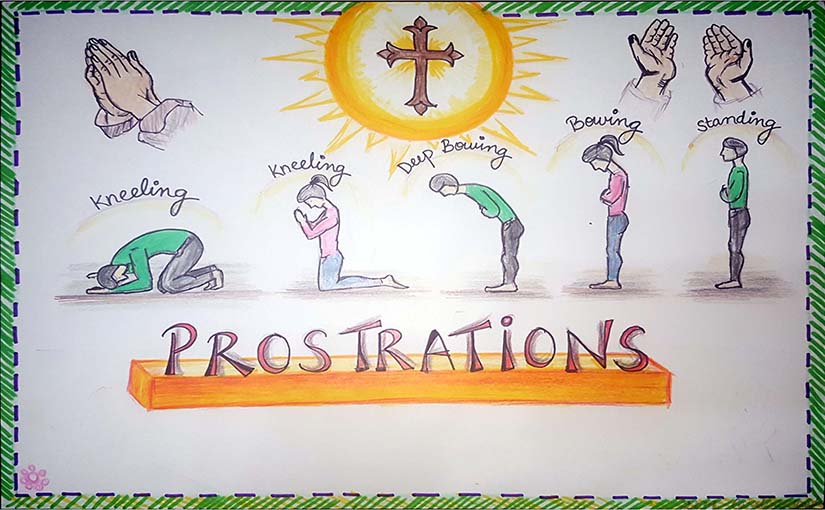 Objective – To appreciate the postures followed during prayer.

Note to the Teacher

For children of this age group, the attention span is short. They learn by observing while also needing constant reminders. To stay put for long hours of service, may sometimes seem daunting to the little ones. This  lesson aims to help ease some of the stress, by presenting the fact that we are in the presence of the Creator of the Universe.

Please feel free to choose the activity and discussion to fit the time available and temperament of the children. The lesson contains material for morning and afternoon schedule. Use as needed

In the sanctuary, we honor and express our reverence to God’s greatness by prostration. Prostration is a way to remember that through the cross of Jesus we, the humans were saved from our fall (sins).

Humans are made of body and soul. When we worship both body and soul should take part in it. By making a prostration we ‘act out’ with our body. While we think of God’s greatness and recite our prayers, our bodies, too, are at work expressing our souls.  Prostration is a sign of humility and submission. Making the sign of the cross is an expression of our faith, As we bow, we should humble our hearts. As we rise up we remember the great (sacrificial) love of Jesus on the Cross and through that, we were saved.

The physical act of bowing down to the ground and then rising up again is a repetition of our baptismal vow – die to our sinful nature and rise up to a life with Jesus. In each prostration, as we go down we ask God to take away bad habits and nature from us and as we come back up we focus on God and live renewed as a pleasing offering to Christ.

It is the Lenten season. Does anyone know how many days of lent we are observing now? When does it get over? Why are we observing Lent? What do you do differently during? Today we will discuss a few body postures we use during prayer and why we use them so you can find it more interesting.

We celebrate Jesus’s birth on Christmas day. Jesus spread the good news to the world. He suffered and died for us on the cross so that we could overcome the bad things that we do, not do them anymore. Jesus was beaten up, he was spat upon, people said bad things about him, he had to carry a heavy cross all the way up to Calvary. We can quite imagine it is not fun at all. Jesus did all that for us because he loves us. He suffered for us. When someone loves us it is fair and square to love that person back.

When we pray we are in the presence of the Lord who loves us, who suffered for us, who died for us. Standing in Church or for prayer may not be fun either. Our legs hurt, we feel thirsty, feel bored and so on. However, can we forget those issues and do it for Jesus?

Objective – Learn to say the word “Prostration” and learn the meaning.

Teach this rhyme with simple actions as appropriate.

Objective – Understand that body posture does mean something to another person.

Description – Cut out the flashcards. Show the flashcards one by one and ask the children what they think each card means to them.

The pictures meant something to you.  The way you stand sit or do things mean something to another person watching you. While we pray we are expected to stand in  a way that tell another person you are praying. So when people see you praying, they will know to be quiet and not disturb you.

Let us go over the story of a prayerful man who was thrown into a den with hungry lions. Have you been to the zoo? What are the scary animals that you have seen? What makes them scary?

Have you been inside a lions cage? Why are they caged?

Bible Story: Daniel in the Den of Lions (Daniel 6) For the teacher

The teacher should read the Bible portion prior to class, and deliver the story in a nutshell. The Bible passage is given below. The summary is given under “Story Outline.”

Everyone that was gathered in King Belshazzar’s hall was laughing, drinking, and talking loudly. Suddenly, a fire from heaven, which was the finger of God, came down and wrote something on the wall in the midst of the people. All the people were astonished and confused because no one could make sense of the writing on the wall. But there was one person who understood what the writing meant. Daniel was able to interpret the message that God had sent to His people. Knowing that he was capable, King Belshazzar sent for Daniel and he interpreted the writing on the wall for the king. The king was delighted and immediately made him one of the three governors of his kingdom.

That same night King Belshazzar was killed in battle and a new king, King Darius, came to power. King Darius came to like Daniel more than the other two governors and this made them jealous. So, the two governors came up with a plot against Daniel. Knowing that Daniel loved his God and worshipped Him all the time, the two governors convinced the king to sign a decree (a law) saying that for 30 days, all must worship the king alone or be sent to the den of lions to be killed. When Daniel heard about the new law he did what he always did.  He went home to a room upstairs and opened the windows that looked out over the city.  Three times that day he went down on his knees and prayed to God just like he always had. As the two governors passed Daniel’s home, they found him praying and asking God for help. Seeing this, the governors rushed to the king to tell of what they have seen. Troubled by this news, the king was very sad because he liked Daniel. The governors eagerly reminded him that what Daniel did was against the law. So reluctantly, King Darius asked for Daniel and sent him to the lions’ den. Before Daniel went in, King Darius said to him, “Your God, whom you serve, will deliver you” (Daniel 6:16). And then the stone was rolled on top of the den, sealing Daniel inside.

Back at the palace, King Darius fasted all night for his friend Daniel. He had no musicians in the court that night and he had trouble sleeping for fear of Daniel’s well-being. The next morning, the king went quickly to the den to check on Daniel. When he arrived, the king called into the den saying, “Daniel, has the God whom you serve continually, delivered you?” And shortly, Daniel replied, “My God has sent His angel and shut the lions’ mouths so that they have not hurt me.” And the king was pleased and relieved to hear the good news and took Daniel out of the lions’ den and “no injury was found on him because he believed in His God” (Daniel 6:23).

The students can watch the video if there is a facility for that:

Daniel was a very good man. He was honest, trustworthy, sincere and above all, he worshipped and obeyed God. King Darius, who conquered Babylon came to like Daniel. Even though he found favor with the king he did not stray away from God’s commands. He always started the day with God. He prayed in a special way. He would go to the room which was upstairs. The windows of the room opened towards the city of Jerusalem. He would open the windows, get down on his knees and pray, giving thanks to God. Because Daniel was exceptionally good, the king wanted to appoint him over all the kingdom.  This did not go well with the other administrators. They began to feel jealous. So jealous, that they tried to find ways and means to get him into trouble. Since Daniel was responsible, honest and fair in his dealings, the administrators had to be creative. There was no way they could find fault with Daniel. Knowing Daniel’s steadfast faith in the living God, they came up with a plan. They went to the king and said, that it would be great to have a decree passed. The decree would ask the citizens of the country to pray only to the king and not anyone else for 30 days. Any one who did not obey the decree would be thrown into the den of lions. The king found the suggestion to be appealing and he signed the decree. Daniel learnt about the decree.

What do you think he did? Was he scarred? Did he stop praying to God? Was he worried? Did he pray in secret with his room closed? Let’s see what he did. He was not worried at all. He did what he always did.

What did we say in the beginning that Daniel did?

Daniel’s enemies went spying on him. They were so happy to find him praying because he had disobeyed the king’s decree. He would be found guilty of disobedience and would be thrown into the den of lions and that would be his end. He would not be ruler of the kingdom anymore.

The enemies went and told what they had seen. The king realized that Daniel was in trouble. He was very sad. He wanted to save Daniel but being king he could not go back on his command. He ordered that Daniel be thrown into the den of lions with the hope that the God Daniel served continually would save him.

The king was so sad that he fasted and kept away from all sorts of entertainment. He could not sleep. Very early the next morning the king ran to the lions den and called out to Daniel.

The lions did not eat Daniel. The living God that Daniel prayed to saved him.

Objective – Reinforce the story of Daniel in the den of lions

Teachers can watch this video prior for explanation regarding making the sign of the cross.

Objective – Let’s do what Daniel did

Daniel always prayed to God, rain or shine. Then the king made a decree that for 30 days every citizen should pray to King Darius only. What did Daniel do when he came to know about it?

Let’s do what Daniel did. Walk in a line : open a door : enter the room, open a window, Get on your knees and pray.

Objective – Listen to the song on worshipping God

If there is time, do the following activities. Otherwise, conclude by summarizing the highlights of the lesson.

Description – Show the children how to be a lion by crawling on the floor, using their hands as claws and making a loud roar. Play a “freeze” game with the children.. Have them move around the room pretending to roar at Daniel. The teacher plays the angel and signal them to freeze. They must stop and stay still until they can move again. Discuss  about how God kept the mouth of the lion closed to keep Daniel safe.